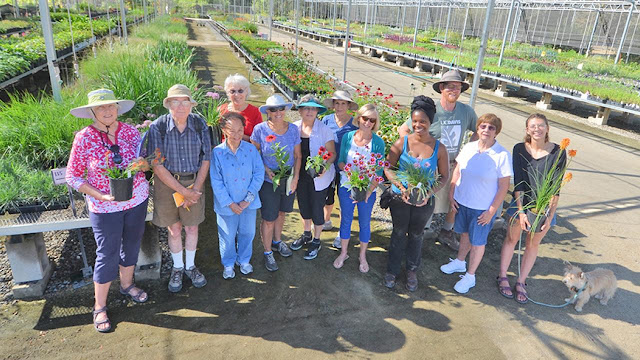 They’ve annually contributed thousands of volunteer hours, helped raise more than $1 million for their favorite cause and host the most popular garden events in Davis.

It’s good to have Friends.

This summer, the Friends of the UC Davis Arboretum and Public Garden are celebrating the group’s 50th anniversary. Like many 2021 commemorations, this golden anniversary will be mostly virtual with several ways that members, supporters and the public can participate online.

Without the help of its volunteer and fundraising organization, there would be no UC Davis Arboretum and Public Garden. Fifty years ago, the Friends formed to save the Arboretum when its university funding had been eliminated.

That was 1971. The budget cut was a crisis for the Arboretum, which was founded in 1936. Supporters and Arboretum volunteers, which had been a loose-knit group, formalized their role and created the Friends. Its bylaws were officially approved in May 1971, clearing the way for the Friends’ first fundraiser – an iris rhizome sale with varieties from the Arboretum’s collection.

Those fundraising efforts grew into the popular Arboretum Teaching Nursery plant sales. Before the pandemic, the sales – which have moved online – drew more than 8,500 customers annually.

The Friends also led the public effort to restore the Arboretum’s university funding and support. The 100-acre Arboretum is now a jewel, not only of the campus but the community. It’s open free to public access daily.

“We are thrilled to be honoring the 50th anniversary of this incredible group,” said Kathleen Socolofsky, assistant vice chancellor and director of the Arboretum and Public Garden, on the arboretum’s website. “Their role in the longevity of this campus and community resource cannot be overstated, and their involvement developing, maintaining, and continuing to support this organization remains critical, especially during times like these.”

The Friends have their own 50th anniversary website: https://arboretum.ucdavis.edu/friends-50th .

How to help celebrate? Here are some suggestions from the Friends:

Add your story to the Friends’ Memories Project , online.

Donate to the Friends’ Annual Appeal .

And visit the Arboretum. Appreciating its beauty and all the hard work its represents is a wonderful way to celebrate this milestone, too.

0 comments have been posted.
GENERAL GARDENING


An article about gardening.

Sacramento Digs Gardening to your inbox.

Dig In: Garden checklist for week of Feb. 5

Make the most of sunny days and get winter tasks done:

* This is the last chance to spray fruit trees before they bloom. Treat peach and nectarine trees with copper-based fungicide. Spray apricot trees at bud swell to prevent brown rot. Apply horticultural oil to control scale, mites and aphids on fruit trees soon after a rain. But remember: Oils need at least 24 hours to dry to be effective. Don’t spray during foggy weather or when rain is forecast.

* Remove aphids from blooming bulbs with a strong spray of water or insecticidal soap.

* In the vegetable garden, plant Jerusalem artichoke tubers, and strawberry and rhubarb roots.

* Transplant cabbage and its close cousins – broccoli, kale and Brussels sprouts – as well as lettuce (both loose leaf and head).

* Plant potatoes from tubers and onions from sets (small bulbs). The onions will sprout quickly and can be used as green onions in March.

Send us a gardening question, a post suggestion or information about an upcoming event.  sacdigsgardening@gmail.com